Creation + Be The One

Ment: JJ on the floor after dancing Empty & Get Out Remix, YooSu trolling xD 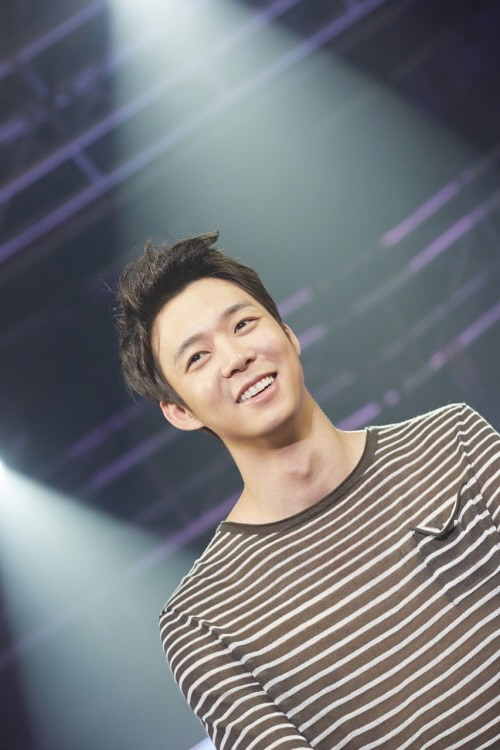 Korean dramas have finally landed in Greece, the wastelands of the Hallyu Wave.

According to the Greek embassy, MBC’s ‘I Miss You’, which features Park Yoochun as the leading role, began airing on ‘TV100′ on the 4th.

TV100 has ‘I Miss You’ scheduled at 10p.m. on Wednesdays and Fridays, a prime time TV slot, and also airs the episodes for a second time on Sundays at 2p.m. TV100 airs in Thessaloniki, the second largest city of Greece, and attracts 2 million viewers in the central northern districts of Greece.

A representative of the region stated, “Thessaloniki has a lot of JYJ fans, so we believe that Park Yoochun’s drama will be very popular there.”

A representative explained, “The drama ‘I Miss You’ has already been exported to various parts of Asia, thanks to the help of the global reach of Park Yoochun’s fandom, and is currently gearing towards a global release in Europe and the US with a dubbed version of the production.”

Meanwhile, Park Yoochun is currently preparing for his movie ‘Sea Fog’, which will begin filming in the second half of this year.

The following are tweets by @lisaliolisalio who has kindly translate tweets of fans who were at the event.
Read from bottom to top. 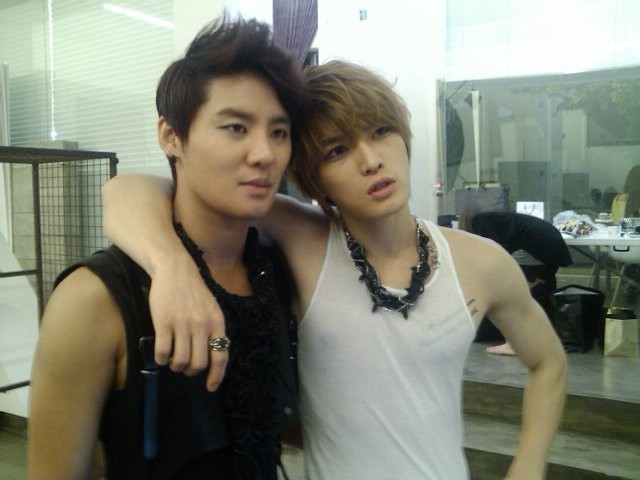 JYJ’s Kim Jaejoong showed to the public their masculine appeal along with group member Kim Junsu.

On July 12th, around 2:10pm, Kim Jaejoong posted a picture of him and Junsu on his twitter profile with the comment, “This is our two shot.”

The Kim Junsu in this photo might have a stiff expression but his eyes blazed with an intense stare.

Next to him with his arm around Junsu is Kim Jaejoong wearing a thick necklace with a sleeveless shirt, making his hard muscles stand out.

The fans who saw this picture reactions: “Can we soften Junsu’s expression a little?” “Jaejoong’s gaze is also good looking.” “Feel like my eyeballs have been purified.” And etc.

Meanwhile, Kim Jaejoong will be appearing in the new SBS drama coming this August 3rd, “Protect the Boss”, where he will be playing the role of Cha Mu Won, a prince of the business community and what is to be a comical performance. 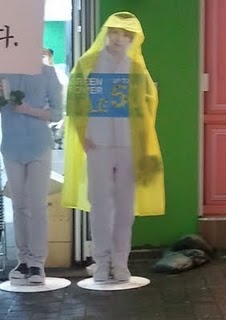 Recently, a post was made on an online community thread claiming that Kim Jaejoong was in Myeongdong, even stating that the one who made the post had pictures as proof. But the person in the photo wasn’t the real Kim Jaejoong, it was a prop-up panel of him.

Standing in front of a store of the cosmetic brand that JYJ endorses, the panel is seen wearing a yellow raincoat. According to the person who made the post, the panel of Kim Jaejoong was the only one that was getting hit by the rain because it wasn’t sheltered by a roof. Therefore, a person who worked at the store whipped out the raincoat and ended up giving many something to smile about.

Netizens who saw the photo said, “I was tricked by the title but this made me laugh”, “Though I was tricked, I’m okay with it. If I was there, I would have wiped the rain off the panel”, “The person who pulled out the raincoat is awesome. She understands the feelings of us fans”, and “This could result in yellow raincoats selling out. It’s awesome.”