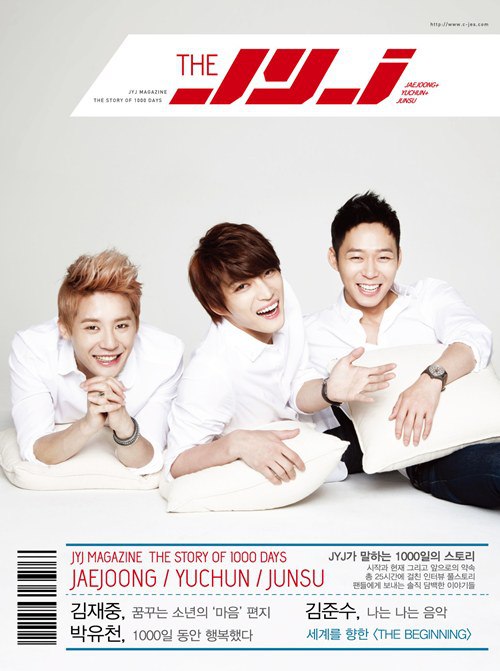 A magazine that details the last 1000 days of JYJ will be released in Korea and Japan at the same time.

On the 21st of January, C-JeS Entertainment stated, “The first edition of ‘The JYJ’, the interview magazine that commemorates the 1000th day since JYJ was created, will be released simultaneously in Korea and Japan. It contains records of their worldwide English album, their world tours, and their individual activities in musicals and dramas in chronological order.”

The magazine is set to be more meaningful as JYJ have concluded all legal battles that they had previously been engaged in as they came to an agreement with their former agency SM Entertainment last November and recently won their lawsuit against their Japanese agency AVEX.

A representative of C-JeS stated, “JYJ fought a long legal battle for three years against their unlawful contract. Not only have they won their freedom, but they have also provided their juniors with a better environment to pursue their activities in,” and “But because of unseen external forces, JYJ’s activities have been restricted and JYJ talked about their feelings about this in their interviews as they took the effort to find new challenges to take on instead of giving up or backing down.”

C-JeS’ CEO Baek Chang Joo stated, “For a long time, we have worked hard to walk down our own path, and we have changed obstacles into opportunities to widen the spectrums for each member, making them leaders of other K-POP stars as they have successfully completed two world tours and made their mark in the drama and musical industries,” and “We wanted to make a book that will be dedicated to the fans who have shown their love and support for the members, no matter how hard things got.”

The magazine ‘The JYJ’ was created through a total of 25 hours of interviews with the members, and will be a total of 139 pages with a special DVD. During their interviews, the members were said to have teared up as they talked about 2009, and all the people who gave them strength during those troubled times.

JYJ’s interview magazine ‘The JYJ – First edition, recording 1000 days’ will be released in Korea and Japan in early February and can be bought at the C-JeS store. 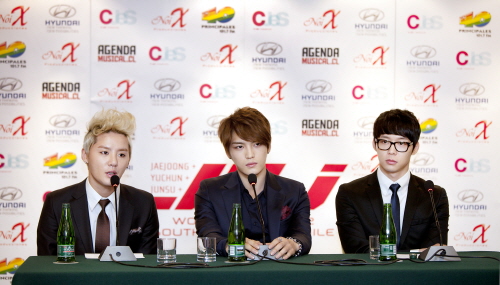 Following their settlement with SM Entertainment last year, JYJ seems to have rid themselves of another lawsuit by claiming victory against their former Japanese management, Avex.

C-JeS Entertainment confirmed the news by commenting, “During the trial in Japan on the 18th, it was ruled that Avex cannot interfere with the Japanese promotional activities of JYJ.”

They added, “Once the exact decision documents arrive, we will send out a press release.”

The group has been battling Avex since 2011 on the basis of interfering with the group’s attempt to put on a charity concert for the Tohoku earthquake.

With this ruling, it seems that JYJ may be able to start promoting in Japan again. 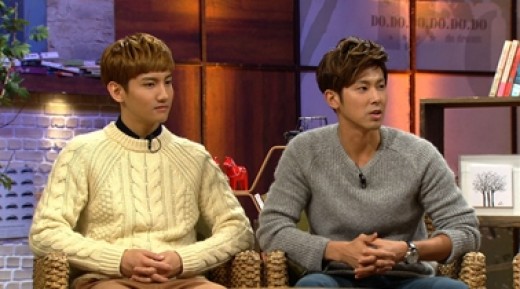 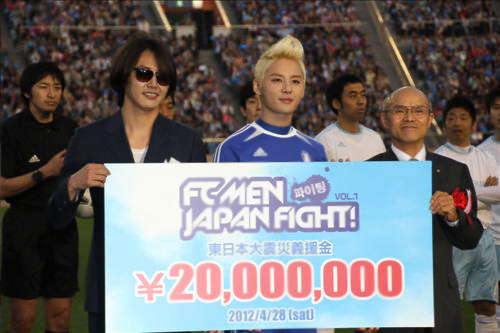 The celebrity soccer team made up of Korean entertainers called FC Men from Soo Won Blue Wings and the celebrity soccer team made up of Japanese entertainers called FC GEININ held a charity soccer game to help recovery efforts in east Japan, the region severely impacted by the major earthquake last year, at Tokyo National Stadium on April 28, and around 40,000 audience members glowed with enthusiasm while watching the game.

The soccer game was designed to remember the earthquake to mark its one year anniversary. A special performance by Juno (Kim Joon Ho), who is the twin brother of Kim Joon Soo of JYJ, and the five member group M.E.N led to an enthusiastic atmosphere before the game.

The soccer players from both teams appeared on the field and listened to both countries’ national anthems. The leader of FC MEN, Kim Joon Soo of JYJ, and actor Yoon Sang Hyun donated 20 million yen to Sakurai, the mayor of the city of Minamisoma in Fukushima Prefecture, which suffered the most severe damage from the major earthquake. Kim Joon Soo received a letter of appreciation from Nakasone, the former Japanese prime minister and the chairman of the Korea and Japan Collaboration Committee, for helping the revival of the region. Kim Joon Soo said before the game, “I am glad that I can participate in this meaningful event.” And Yoon Sang Hyun said, “It is my honor to become a coach of the Korean soccer team, and I will definitely lead this game to victory.” 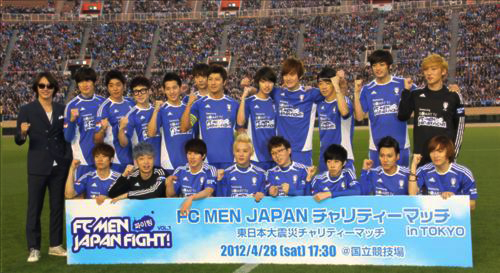 FC MEN gave up the opening goal to the Japanese team, but the first half finished in a tie as the Japanese team scored an own goal. The two teams played a tight game in the second half, and the audience went wild while watching the game. FC MEN led the game with better physical conditioning and it was expected to win the game with the fourth goal by Shin Ki Hyun at the 39th minute of the second half, but the game became tied again as the Japanese team scored one more goal. The game looked likely to be tied, but Kim Joon Soo scored the fifth goal after receiving a pass from actor Lee Wan right before the game finished. The Korea celebrity soccer team won by a score of 5 to 4. 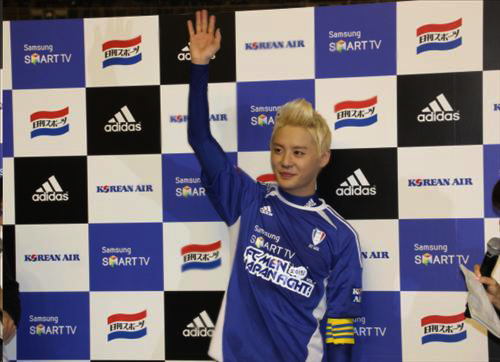 The 40,000 audience members cheered both teams with loud applause while watching the game. Kim Joon Soo, who ran the whole game without taking a rest for his fans, said, “I felt pressure as the Japanese team was too strong, but I am glad that we finally won the game. I thank our team members’ great effort.”

In addition, the players of FC MEN including Juno, Lee Wan, and Seo Ji Seok ran around the field and presented soccer balls to the audience who rooted for the two teams.