[TRANS] 111219 “Full-Song Ringtones” With The Voices Of Tohoshinki, Distributed Exclusively By Mu-Mo 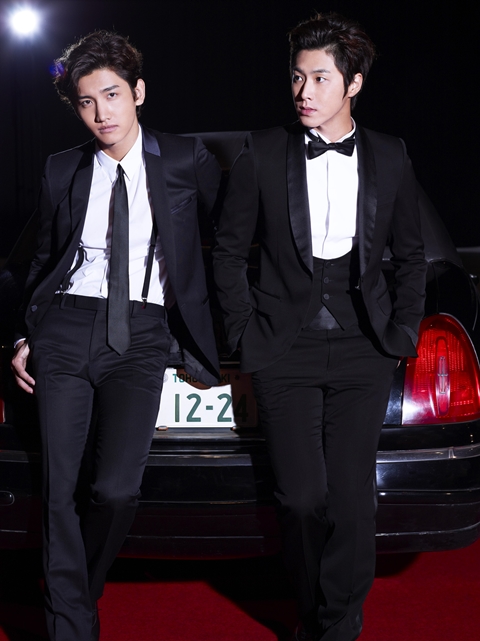 Tohoshinki, whose appearance in the year-end NHK’s “Kohaku Uta Gassen” has been decided, and will also be holding a nation-wide tour beginning January next year, released their first Winter Ballad Single “Winter Rose/Duet (Winter Ver.)” on 30 Nov!

This release is a luxury gift version single which contains Tohoshinki’s first Christmas song, “Winter Rose”, and the winter version of “Duet” from the album “Tone”.

“Winter Rose” is a familiar song being broadcasted as the TV-CM song of the CM that the members themselves appeared in, the 7&I Holdings’ “Tohoshinki’s Winter Gift (Snow Version)”, while “Duet (Winter Ver.) has been decided upon as the theme song for the first mobile drama that Ishihara Satomi will be starring in, Bee TV’s “He’s, My Sister’s Lover”, which will be broadcasted starting 25 Dec.

Full Audio Back To Tomorrow

It’s so dark HoMin, I can hardly see a thing. Hearing the music is the important thing though,right?
Momma Cha 🙂

Lee Min-Ho is back…
In a new Korean drama “City Hunter’. Watch it free online in HD on ViKi!
www.ViKi.com

This is a powerful vocal performance, Junsu. You sing so strongly and passionately. Momma Cha